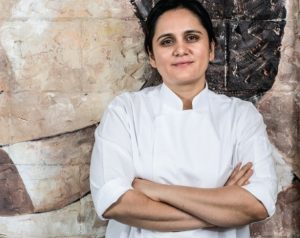 Bangkok (Thailand) – March 5, 2019 – (travelindex.com) – Garima Arora, executive chef and founder of Gaa in Bangkok, has won the title of elit Vodka Asia’s Best Female Chef 2019. Arora will be presented with her award at a ceremony sponsored by S.Pellegrino & Acqua Panna, on Tuesday 26th March 2019 in Macao.

In partnership with elit Vodka, the 50 Best organization is committed to celebrating role models who demonstrate a progressive vision for gastronomy. William Drew says: “This award recognizes female chefs whose passion, innovation and entrepreneurial spirit serve to inspire the next generation of cooks. Garima Arora has had a huge impact on the dining scene in Asia in a short period with her brilliant blend of Indian traditions and Thai ingredients.”

Arora worked briefly as a journalist before pursuing her interest in the culinary arts. After graduating from Le Cordon Bleu Paris in 2010, she worked at Noma in Copenhagen, learning alongside legendary chef René Redzepi. Recalling her two-plus years at Noma, she says the experience forever changed her approach to cooking. “I learned how to think about food more intelligently. I started looking at cooking more like a cerebral exercise, thinking about what you do, why you do it and understanding your place in a community.”

Returning to Asia in 2016, Arora was appointed sous chef at Gaggan, the award-winning Bangkok restaurant that has held the No.1 position on Asia’s 50 Best Restaurants list for four consecutive years. In April 2017, the chef opened Gaa, a three-story restaurant located opposite Gaggan that celebrates a modern tasting menu using traditional Indian techniques. Showcasing her creativity and culinary inspirations, each dish is made from locally sourced ingredients and explores the connections between Thai and Indian food, from fruits and curries to sauces and spices. The menu is a reflection of Arora’s cultural heritage as well as the community that surrounds her.

Diners choose between a 10- or 14-course tasting menu, which changes quarterly to reflect seasonal specialties. The result is a dining experience that is innovative, modern, playful and unpredictable. In November 2018, Gaa earned its first Michelin star, making Arora the first Indian woman to win such an accolade.

Accepting the prestigious Best Female Chef title, Arora said: “This award is a validation of our team’s hard work and commitment to excellence. I am honored that chefs and respected industry peer voting on this award recognize and appreciate our efforts.”
Frances Gaillard, International Marketing Director for Stoli Group, overseeing elite Vodka, adds:

“Garima has accomplished so much in such a short time – a true testament to her diligence and to her distinctive fusion of cuisines learned in some of the finest kitchens in Europe and Asia. We are pleased to be the latest to recognize this rising star in the gastronomy world.”elite Vodka Best Female Chef Award The elit Vodka Best Female Chef Award.

Restaurant Gaa of Chef Garima Arora in Bangkok is highly rated at Top25Restaurants.com by Travelindex and the trusted Restaurant Rating Index for the best restaurants in Asia.