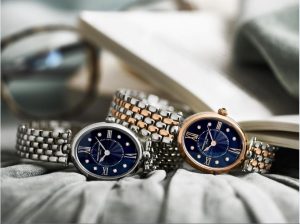 Basel (Switzerland) – March 21, 2019 – (travelindex.com)  – Baselworld 2019 officially opened with a clear signal that it is heading towards a modern future. The ceremonial “Ribbon Cutting” was held this morning in Hall 1.0 to the Alphorn tones of Swiss musician Eliana Burki. The musician is renowned for her unconventional use of the alphorn in the funk, pop and jazz songs, symbolizing Swiss traditions in a contemporary form.

In addition to Michel Loris-Melikoff, Managing Director of Baselworld and Hans-Kristian Hoejsgaard, CEO ad interim of the MCH Group, Federal President Ueli Maurer, Eva Herzog, Member of the Basel City Government and members of the cantonal governments took part in the symbolic cutting of the blue ribbon in Hall 1.0 on the occasion of the opening ceremony of Baselworld 2019.

After a tour of the show by the delegation and short visits to brands such as Rolex, Patek Philippe, Chopard and Hublot, the representatives of the international watch and jewelry industry and the media were welcomed on the stage of the new “The Show Plaza” event platform in Hall 1.2.

Challenges as a driving force for change
Michel Loris-Melikoff introduced himself to the audience as an industry novice with many years of experience in event planning and implementation. During his many trips over the past nine months, he noted that this sector was very special and that the show had global significance. But also that “our industry is undergoing a radical upheaval due to digitalization. This is a fact that presents us with completely new challenges.” The motivation for the new Baselworld team is to fundamentally transform the show. “The major changes in the watch and jewelry industry are affecting producers, retailers, the media and trade fair operators alike. Therefore, we can only tackle and master them together,” is his credo. The initial changes have already been implemented at Baselworld 2019. These included: modern communication strategies, strengthening the jewelry sector, expanding the gastronomic offerings at the show and coordinating the dates of Baselworld and SIHH from next year. As indicated at yesterday’s press conference, Mr. Melikoff reiterated that this was only the beginning of the comprehensive transformation that the show will undergo from 2020 onwards.

Linking the digital world with the realm of experience
Hans-Kristian Hoejsgaard took the opportunity to thank those present for their encouragement and trust “especially during the past months fraught with challenges.” He emphasized that Baselworld was an eminently important component of the MCH Group and that everything possible would be undertaken to prepare the show for the challenges of the future. This is primarily about combining digital communication with real experiences and encounters. He promised that Baselworld would be transformed from a classic sales and distribution platform into a future-oriented experience event. “We listened carefully to the exhibitors and worked with them to develop a vision and concept for Baselworld 2020 and beyond.”

Trade fairs – meeting places, also in the future
In her speech, Eva Herzog, Councillor and Chairwoman of the Finance Department of Basel-City, recalled outstanding social achievements in which mechanical watches have always played an important role as time witnesses and timekeepers – from the Apollo 11 moon landing to the first ascent of Mount Everest to the crossing of the English Channel. She also emphasized the importance of getting to grips with the challenges of the digital age and reconciling them with the personal exchange. In this respect, she is optimistic about the future of Baselworld.

Federal President Ueli Maurer concluded the event at the Show Plaza with a passionate speech on the fundamental value of trade fairs for society. He explained that every civilization had begun with trade fairs and markets where opinions and ideas were exchanged as well as knowledge and goods. “Basel has been such a marketplace for centuries that it stands for growth and further development,” said Maurer. Because this exchange cannot be reduced to the screen of a smartphone, he is convinced that Baselworld, with its long fair tradition, would continue to play an important role in the future.